I am officially half way done with this pregnancy! I had my 20 week appointment and ultrasound today.  Max came to this appointment and was fascinated during the ultrasound.  He loved seeing his brother and being a part of that.  He has been very concerned that Hudson would have a hole in his lip, so he seemed to be relieved when the tech assured him and showed him his brothers full upper lip.  The ultrasound went well, Hudson is growing perfectly.  He is measuring a day ahead, so we are right on track.  His kidneys are dilated, which is abnormal, but Dr. Young said it wasn't too concerning at this point.  We will have to have another ultrasound in 2 months to recheck this.  I still haven't gained any weight, but I am certain that at my next appt that will change. 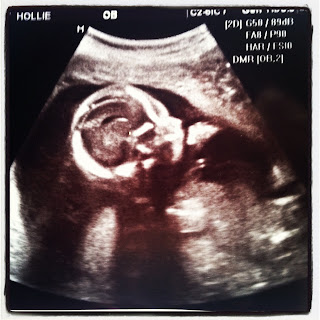 Hudson was a little wiggle worm during the ultrasound.  He is bum down, and loves his hands in his face.  Max thinks that his brother looks like a dinosaur because he could see his "fossils".  It was confirmed, we are still having a boy! Daddy is very excited to get more pictures of this little guy.
Posted by Drew and Hollie at 12:16 PM