After my LP on Tuesday I was feeling really good.  Besides the back pain, I had little to no side effects.     Wednesday evening the headache began and the back pain increased.  I wasn't able to sleep much and it continued into the next day.  By now I had passed the 48 hour mark, and I contacted my neurologist to see what I should be doing.
They said given the side effects and the time frame it sounded like the LP site hadn't clotted off and that I was leaking spinal fluid into my body.  CSF isn't dangerous to me or the baby in any way, but with a leak it doesn't allow my body to replace the fluid that was removed.  I was told that I would need a Blood Patch procedure done.  I could head to the ER right then, as my neurologist had already contacted the doctor working.  Or, I could try and wait it out until the next day when same day surgery would work me into their schedule.  Max was at his dad's house for the night and I decided that I should just get it taken care of.  There was no point in being miserable all night if I had to have the procedure done anyways.
I got to the ER, talked to the doctor working, and they called in the anesthesiologist.  He explained to me what would happen, what to expect, and we got started.  They would draw 20 cc of blood from my arm and insert that blood into the spinal column.  The hope is that by injecting the blood it will clot off the leak, and my body will be able to replace the fluid.  Essentially, I was lucky enough to get another LP!!
They had to use 20 gauge needles for the IV, and I had to have one in each arm.  This time they did the procedure while I was sitting up, and the needle was a bit larger so they could flush the blood in quickly.  Surprisingly enough, the procedure didn't even phase me.  The pressure in my head was so intense that the needle in my back was not a concern.  The anesthesiologist was impressed at my pain tolerance and even suggested that I try natural childbirth...probably not!
Anyways, the procedure was fairly quick and so were the results! The "tap headache" was drastically improved within the hour, and I was beyond relieved.  The back pain has been much worse this go round, I'm assuming that is because I have been poked and prodded a little too much for my back's liking.  I was basically threatened that if I didn't take it easy over the next few days that I'd be back in the same boat.  I have been SO good, and stayed down except for bathroom runs.  Since I can hardly move, that hasn't been too hard to do. 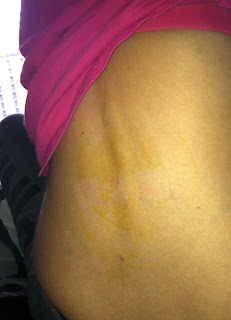 The holes are tiny! The bottom one is from the initial LP and the top is from the Blood Patch.
(Please disregard the iodine and chubby back)
Posted by Drew and Hollie at 11:00 AM