Ready or not...Here he comes!

It was Thanksgiving night, we had just gotten home and got Max into bed, and at about 10:15 my contractions began.  I had been having contractions lately, but nothing that regulated out.  As soon as these contractions started I knew they were different.  I spent about 3 hours trying to convince myself that I was timing them wrong, or that I was being a wuss, and even that they'd stop "any time now".  Around 1:00am I used the restroom and was horrified at the amount of blood there was.  I woke Drew up, called my mom to come sit with Max, and we headed to the hospital to get checked out.  My contractions had been 3 minutes apart and they were increasing in intensity, but somehow I kept telling myself that they'd give me a shot to stop the labor and send me home.  We got to the hospital, got hooked up to the monitors, I had to get a freaking catheter (hated that), and the nurse did a cervical check.  I think we were all shocked when she told me I was a 4+ and 95% effaced.  I knew once she told me that, that we would be having this little guy today.  I was only 34 weeks though, I couldn't have him yet, it wasn't safe, I was terrified.

I just have to say that the timing of this was a divine intervention.  Literally, two days after my husband unexpectedly returned from deployment, I went into premature labor.  If I hadn't had him there, I do not know what I would have done.  He was so calm, he rubbed my back, he prayed with me, he told me everything would be okay, he even walked me to the bathroom every 15 minutes and held my frumpy hospital gown and my IV. 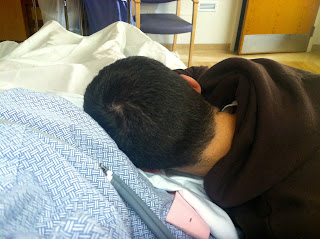 Dad getting some rest with the belly while we waited.  It was a long day for everyone.

Since I was still so early, Dr Allen tired all that he knew to try to stop my labor.  I was given three shots, an oral medication, and an IV of Magnesium.  None of them seemed to help much, clearly Hudson had his own plans. They slowed the progress of my labor, but the contractions continued.  By this point I had been admitted, and I was not going home even if they could stop the labor.  But the outcome wasn't looking great.  I was given a steroid injection that rapidly develops the baby's lungs, and they didn't want me to deliver until we had given that enough time to do some work on those tiny baby lungs.  At 11:30am I was a 6 and they gave me the go ahead to get my epidural.  I was so relieved after getting that.  I had had contractions every three minutes for 13 hours...I was miserable. At 3:00pm the doctor turned off the Magnesium and let my body do it's thing.  At 4:45 he broke my water, fifteen minutes and four pushes later Hudson Jonathan Blunt was born. 5.7lbs and 17in long. He had a headful of dark hair, his daddy's lips, and his mommy's nose. 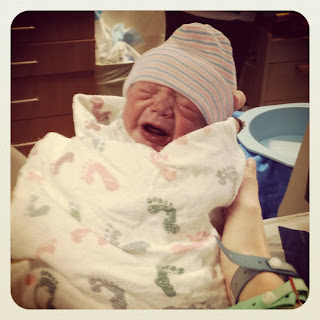 I got to hold him for a brief moment after they made sure he was stable, before they took him to the NICU. 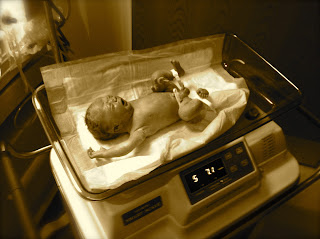 He was only 1in shorter than Max, but exactly 3lbs lighter.  He looked so small. 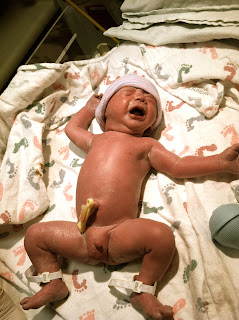 I have a friend who works in the NICU at Utah Valley, so I called her while I was in labor to find out what we should expect as far as the condition of our baby.  She told us that he'd probably be about 5 lbs, that his lungs weren't mature enough so he'd probably be in respiratory distress and put on C-PAP, that he may have trouble maintaining his body temp, and that he'd probably have to have a feeding tube until he was old enough to nurse.
When he was born, I remember hearing his quivering cry, and I was so happy because that meant he was breathing! Drew was able to cut his umbilical cord, and the look on this proud dad's face was priceless.  Drew went with the baby to make sure he was going to be okay while I finished up in labor and delivery.  Turns out it was a blessing that my contractions hadn't stopped because there was a placental abruption, which was the cause for all of the bleeding.

Hudson was taken to the NICU and assessed.  To everyone's surprise he wasn't showing any signs of respiratory distress, he was also maintaining his own body temperature, and the only problem he was having was that his blood sugar levels were too low.  They put an IV in and monitored him very closely.
It was several hours later that I was wheeled into the NICU to meet my baby boy, and it was such an overwhelming moment.  He was hooked up to tubes and wires, and he was swollen from the IV fluids he was receiving, but he was the most perfect little boy. 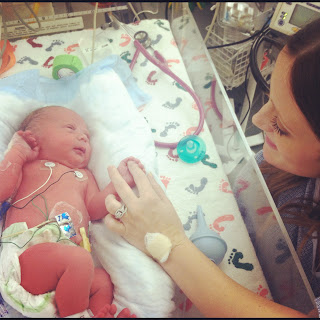 This was the first time I saw him after he was taken from the delivery room.  It was an awful feeling seeing him like this, and even more awful that there was nothing we could do for him. 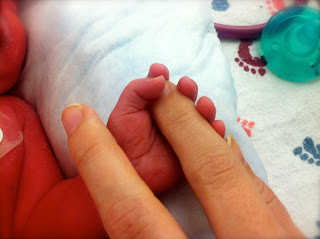 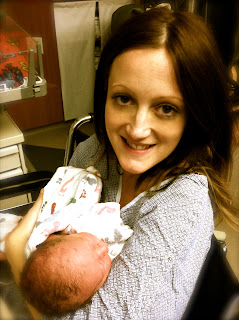 I was able to hold him as they transported him to his new bed in the NICU.  I was one happy (and tired) mommy at this point. 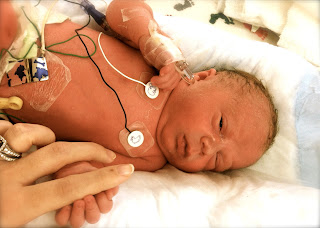 The next morning we talked to the pediatrician taking care of him and got a run down of what to expect.  Chances were that he'd be in the NICU until his due date (Jan 1), they were inserting a feeding tube and for the time being I wasn't able to nurse him, and they would be doing some tests to determine the condition of his kidneys.  (At 20 and 28 weeks he showed dilated kidneys on his ultrasounds)
The ultrasound of his kidneys after delivery showed dilation on one side, and he will be sent home on an antibiotic to prevent urinary tract infections.  We will repeat the ultrasound when he is one month old and see if there is any improvement. 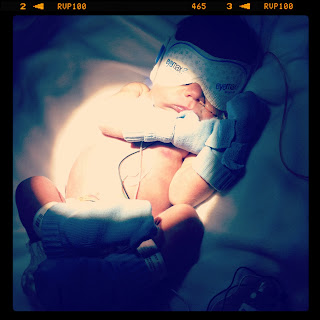 He was showing signs of jaundice a couple days after delivery, and he was put on lights for a short period of time.

His feedings have been/continue to be our biggest struggle.  He was only allowed non nutritive feedings for some time.  Once he mastered sucking, swallowing, and breathing we were given the go ahead to breastfeed him twice a day.  We had to do test weights before and after his feedings to determine of many ml's he was intaking.  We were moved up to 3 feeds a day, 4 feeds a day, 6 feeds a day, and then all 8 feeds.


It's tiring, and frustrating, and heartbreaking having to leave your child at the hospital.  It's against every motherly instinct to not be able to hold and feed and care for your child.  We are proud of him and the remarkable progress he has made thus far, and we are so appreciative to the nurses and doctors taking such exceptional care of him.